Bug has serious misgivings about her hippy-dippy dad’s dream of moving to the country .

Life in the city may not be great but 12-year-old Bug Hapensak isn’t sure that a move to the country will make anything better.

Reluctantly, she finds herself caught up in an entrepreneurial misadventure with her father Walter that involves a load of 1,000 unmatched running shoes (factory rejects rescued from the dump) and an ancient truck about to die of old age.

Together, they set off to make a fortune. But the future looks bleak. Their money has run out and they have no place to live.

But the ever optimistic Walter isn’t concerned because when they stumble across Tichburg (population 473), he is convinced they have  discovered paradise.

Bug, on the other hand, isn’t quite so sure.

Bug had seen her father hatch some pretty wild schemes over the years, but this unmatched-running-shoe business was the craziest by far. People who didn’t know Walter could easily become caught up in his excitement and enthusiasm, and everyone agreed that he was a great salesman. Yet the sad truth was, he always seemed to be selling the wrong thing in the wrong place at the wrong time.

The thought of what might go wrong with unmatched running shoes was almost too much for Bug to bear. If they lost all their money on this venture, they would be in big trouble. They had given up their apartment, abandoned half their furniture and left the only city she had ever known. If the shoe business flopped, they would be homeless. Closing her eyes, she shuddered as she imagined what it would be like having to live under the Flatsview Bidge with the ragged, grubby old men who sought shelter there.

Eventually, the pair arrive in tiny Tichburg just in time to set up a sales booth at the annual fall fair where they meet customers who think unmatched running shoes are a brilliant idea. Sales are steady and both Bug and her father meet their new best friends. Maybe.

This is a wonderfully warm and funny novel about friendship, family and wacky entrepreneurial dreams.

Bug is a sequel to Frogger.

Be the first to review “Bug” Cancel reply 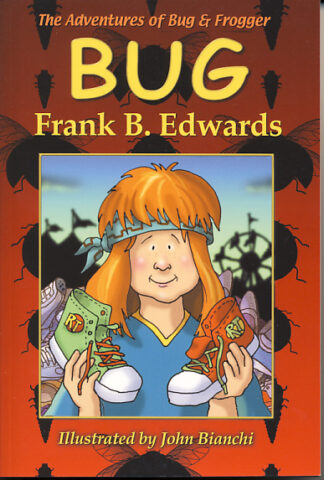