Happy-go-lucky Frogger lives a charmed life but his luck is about to change when he takes on a babysitting assignment.

The village of Tichburg boasts 27 volunteer firefighters, 4 fire trucks, 3 small stores, a population of 473 offbeat residents — and an 11-year-old auxillary asistant to the fire chief named Frogger who cheerfully wander around town trying to be helpful to everyone.

But as Frogger is about to find out, life in Tichburg is not as easy as it should be for a kid who tries to make everybody happy.

A simple babysitting job for the rich family down the street gets complicated when Cigar Davis, a crusty 85-year-old shows up with a crowbar looking for treasure he left in the attic 60 years ago. He wants to bash down a few walls to find it and Frogger isn’t sure how to say “no.”

Frogger spotted a large crowbar and a sledgehammer next to a gaping hole in Mrs. Troth’s clean white plaster wall.

“Boys, I found what I wuz lookn’ fer,” Cigar Davis rejoiced. He was in high spirits, oblivious to the destruction around him. The twins huddled closer. “When I wuz young — about Frogger’s age there — I had a secret hidin’ place behind them walls, and I’d crawl in there with a flashlight and hide when I wanted ta be by myself — which was fairly often. I always seemed to be in some kinda trouble”

The twins nodded understandingly. Certainly Frogger had no difficulty blieving that the old man had upset his parents on a regular basis.

Frogger is a very funny juvenile novel set over two days in a little village where everyone knows each other — and each others’ secrets. Despite his young age, Frogger is a member of the local fire department (assistant to old Mrs. Gilmore, the fire chief who seldom leaves her big front porch) and finds himself in the middle of everything that goes on. His fateful babysitting job earns him admission to the annual Harvest Fair where he saves the life of his nemesis and introduces him to the girl fated to be his new best friend, a city girl who thinks he’s a country bumpkin.

Be the first to review “Frogger” Cancel reply 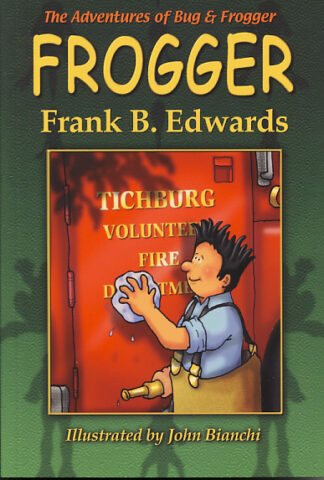