The Lab Rats of Doctor Eclair

A madcap look at science experiments gone wrong. Just how did those rodents get their super powers?

The Lab Rats of Doctor Eclair

Doctor Eclair is a kind-hearted scientist who treats his three lab rats (Ramelda, Blobber and Niner) as colleagues rather than experimental subjects. After a bolt of lightning hits the laboratory, the rats become super-colleagues that bring extraordinary powers to their research and life starts to get interesting. Development of a robotic lab rat (designed to replace real ones) goes awry during an attempt to boost its intelligence and the robot goes missing. Even worse,  Ramelda’s little “ratlings” disappear with it.

There was no more time to waste!

Ramelda, Blobber and I knew that technology could not replace good old-fashioned legwork. All that maze running and wheel jogging was finally going to pay off!

After a suitable amount of mayhem,  the rodent heroes trap the runaway robot in a giant rat trap and rescue the youngsters, proving along the way that robot intelligence improves with play. Fade to the next experiment…

Lab Rats was Bianchi’s second project to feature computerized artwork and signaled his move into high-resolution, hi-tech illustrations that had depth and texture he couldn’t capture with his traditional water colours. While not his best story perhaps, it is memorable and fun.

Link to this short video by Frank B. Edwards and John Bianchi to learn 10 ways to help children become happy readers. 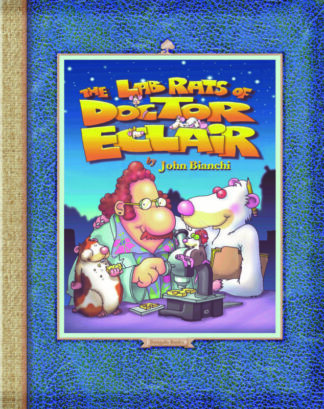 You're viewing: The Lab Rats of Doctor Eclair $6.95
Add to cart