Three friends face off against a deadly coven of witches while looking for their ghostly friend.

History comes to life when Neil leads his friends on a trip to Salem, site of the infamous 1692 witch trials and the topic of their award-winning school  project. The trip is meant as a reward for excellence but provides something much more frightening for each of the trio.

Ally thinks she sees an ancient ancestor who looks just like her at on a busy street.

Adam considers putting his tourist brochures aside long enough to help defeat an evil plot against  the entire human race.

And Neil tries to track down a malevolent witch who has been stalking him since he left home.

It was then that Neil spotted movement across the street in the doorway of a darkened jewellry shop. A figure stood lost in the shadows but stepped forward for a split second. The light of the mall clearly revealed her face.

He gasped in alarm.

The putrid face from the library, with its festering warts and sinister grin, looked back at him. She had been staring directly at him.

He stood stock-still as his stomach churned. Fighting to regain composure, he rose to his feet and started across the street. The image of that face would haunt his dreams forever — and somehow it seemed familiar.

As they have in the past, the youngsters turn to Arnold Popchuck, their ghostly friend, for help when the forces of darkness close in on them but for some reason he seems to be gone.

Popchuck’s End is the last of three juvenile novels about the ghost of Arnold Popchuck. The Popchuck series is a perfect introduction to ghost stories for young readers (grade four and up).

Be the first to review “Popchuck’s End: #3” Cancel reply 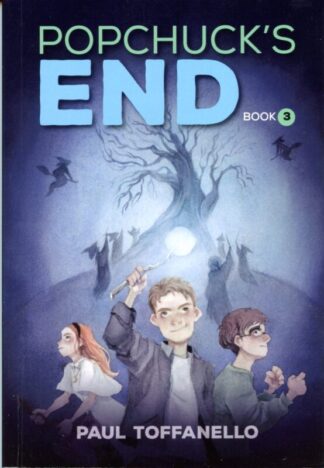