View cart “Classic Days at Pokeweed Public School” has been added to your cart.

The wackiest adventure compendium ever published.

The Bungalo Boys were the main characters in John Bianchi’s first quirky storybook for kids, “Last of the Tree Ranchers.” They are peculiar characters whose adventures mirror the movies that John watched as a boy growing up in Rochester, NY. This compendium combines the Boys’ first three stories.

“Last of the Tree Ranchers” (1986) spoofs old westerns where ranchers have to fend off a marauding gang from stealing their stock. In this case, the Boys raise (and ride) trees instead of horses and the bad guys are a group of hungry beavers. The Bungalos go after the bandits with lariats and true grit.

“Bushmen Brouhaha” (1988) sees the Boys still riding trees but this time in the Serengeti as they seek out the illusive Elephant Tree and battle a troop of baboons to get it.

“Champions of Hockey” (1989) presents the battle for the Bungalo Birdbath trophy in a final game against the goonish Bruins of the NHL (Natural Hockey League). Despite their best shinny skills the Bungalo team is behind until Little Shorty gets a breakaway when the pond ice breaks up and he finds himself adrift, headed toward an empty net.

These are probably three of the silliest kids stories every published in Canada and they attracted a lot of attention when they were first published. CBC TV’s The National called “The Last of the Tree Ranchers” the  “dark horse” of Christmas book season and Peter Gzowski of CBC Radio told his enthusiastic book review panel that he thought it sounded stupid. They were both right.

Link to this short video by author Frank B. Edwards and John Bianchi to learn 10 ways to help children become happy readers. 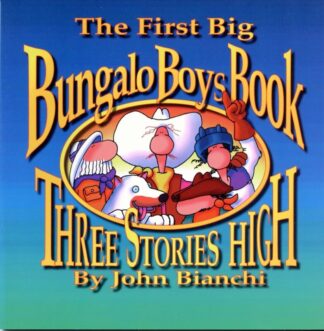